Do I need to say anything? The Joker has been portrayed memorably many times on screen as well as in comics. When i think Joker though, I probably think the Arkham Games. But wherever he pops up, he’s pretty much the same. 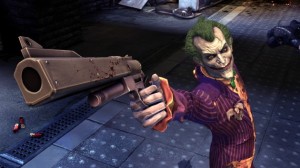 Brilliant and devious Mind
Enhanced Reflexes d8
Joker’s Mind d8 (used to represent tricks, traps or plans set-up in advance)
SFX: Fooled you. Add a d6 and step-up Joker’s Mind to create any complication that could have been set-up in advance.
SFX: That’s not really me Bats Spent a die from the doom pool when stressed out to reveal ‘The Joker’ as a double, the real Joker watching safely from afar.
Limit: Tantrum Step up emotional trauma and add die to doom pool.

Joker shouldn’t really be used in combat, there should really be plots and traps, henchmen and lackeys, mercenaries and assassins. If the heroes are fighting Joker in a fair fight, something went wrong.
Possible swaps for distinctions could be: Brilliant and devious, Unpredictable, Pushing the Bat’s buttons…